In the wake of the Great East Japan Earthquake on March 11, 2011, TMG (Tokyo Metropolitan Government) announced new damage estimates which suggest that Tennozu Isle is a safe and secure city, as we show below.
Please read and thoroughly discuss this subject at work or home so that you are all aware of steps you must take without confusion or panic when facing an unexpected disaster. 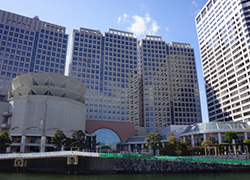 01.History and Summary of Isle

In 1853, four warships arrived at Uraga Harbor under the command of U.S. Navy's East India Squadron, Commodore Perry.
This resulted in the start of the construction of Shinagawa Daiba to defend the coastline. To facilitate land reclamation, the soil was transferred from a part of Shinagawa Gotenyama which is a noted place for cherry blossoms and stone walls were delivered from Odawara and Izu.
This was held as the fourth Daiba (No.4 Battery) project; it involved a total of 2.7 million local farmers and fishermen. At 70% completion it opened to the public at the current location of the SEAFORT SQUARE.Later, this island was handed down to the private sector in the middle of the Meiji Period and completed its land reclamation around the island in 1939.

Tennoz Isle district is a 22 ha sized island surrounded by canals and located approximately 1km southeast of the JR Shinagawa Station.
It used to be occupied with warehouses, but since the redevelopment project, it is now transformed into a district filled with office, residence, hotel and retail facilities with 12 skyscrapers.
It is affectionately known as " Tennozu Isle (Isle comes from English word, island.)" to people,Each building and station are connected by skywalks, so you can walk around the city without an umbrella on a rainy day. 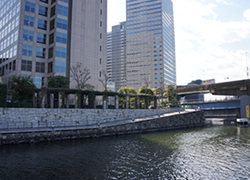 02.Estimated Earthquakes and their Magnitudes

According to "About the New Assumptions: Estimated Damage from a Tokyo-Epic entered Major Earthquake" announced by TMG, magnitude in our district is being estimated as you see on the right. 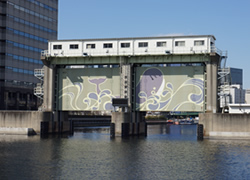 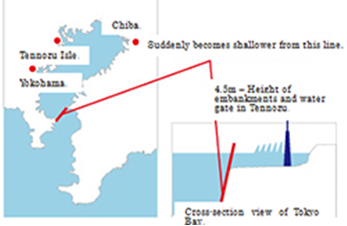 【Shape of Tokyo Bay and Tsunami】

Tokyo Bay forms the shape of an open mouth which narrows at the points of Futtsu-misaki (Chiba pref.) and the Kannon-zaki (Kanagawa pref.) in the bay.
Because the depth of water between Kurihama and Kanaya suddenly shallows and the coastal area of the inner-city is shaped like a snake, when a tsunami occurs outside the bay it will have hard time reaching the inland part.
It is said that it would take 40-50 min. for a tsunami occurring at the mouth of the bay to reach to an inner part of the bay.
It’s safe to say that, even during an emergency, we still have enough time to take action after we receive a tsunami warning from the mouth of the bay. Average depth of water inside the bay is 20m and it is less likely for a tsunami to occur inside the bay. 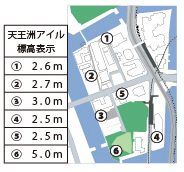 As for the Taisho type kanto earthquake which is expected to have the highest tsunami (expected 8m max. in Sagami Bay) in Tokyo Bay, it is assumed that the maximum tsunami run-up height will be 2.6m (at high tide) at coastal areas and about 2.0m (at high tide).
Tennozu Isle is 2.5m above see level, and it is thought earthquake proofing again with a safe area among the finished water gate and breakwaters (4.5m in height) of the construction.

【Damage due to the Shake】

The skyscrapers in Tennoz Isle were designed considering the safety in case of an earthquake.
There is a very small chance that any of expected earthquakes could impact on the structural parts of the building.

【Damage due to Liquefaction】

Tennoz Isle is an old reclaimed land and it’s classified as "Small potential for occurrence of liquefaction" in Liquefaction Potential Map of Tokyo published by TMG.
Even during the recent disaster of Great East Japan Earthquake, liquefactions were not seen in Tennoz Isle.
Despite its coastal location, buildings are supported by piles that are superior in strength on a firm ground.
All bridges over the Tennoz Isle (Except the pedestrian bridge) are completed with earthquake-proof construction as well.

【Damage due to Fire】

Tennoz Isle district is an area with higher degree of safety, as this district is a safety evacuation area specified by TMG.
Skyscrapers are fire-resistant building, so it’s assumed that the chance of damage caused by fire shall be extremely low.

04.What to do During Times of Disaster

Based on damage estimates stated above, it is determined that the safety reliability in case of an earthquake in Tennoz Isle is extremely high, but it’s still necessary to protect yourself from falling objects until it stops quaking.
It’s more dangerous for you to flee in panic because you might expose yourself to collapsed walls and broken glass.
Skyscrapers in Tennoz Isle implement fire and disaster prevention plans.
After being hit by a disaster, please act in accordance with the plan specified by each business.